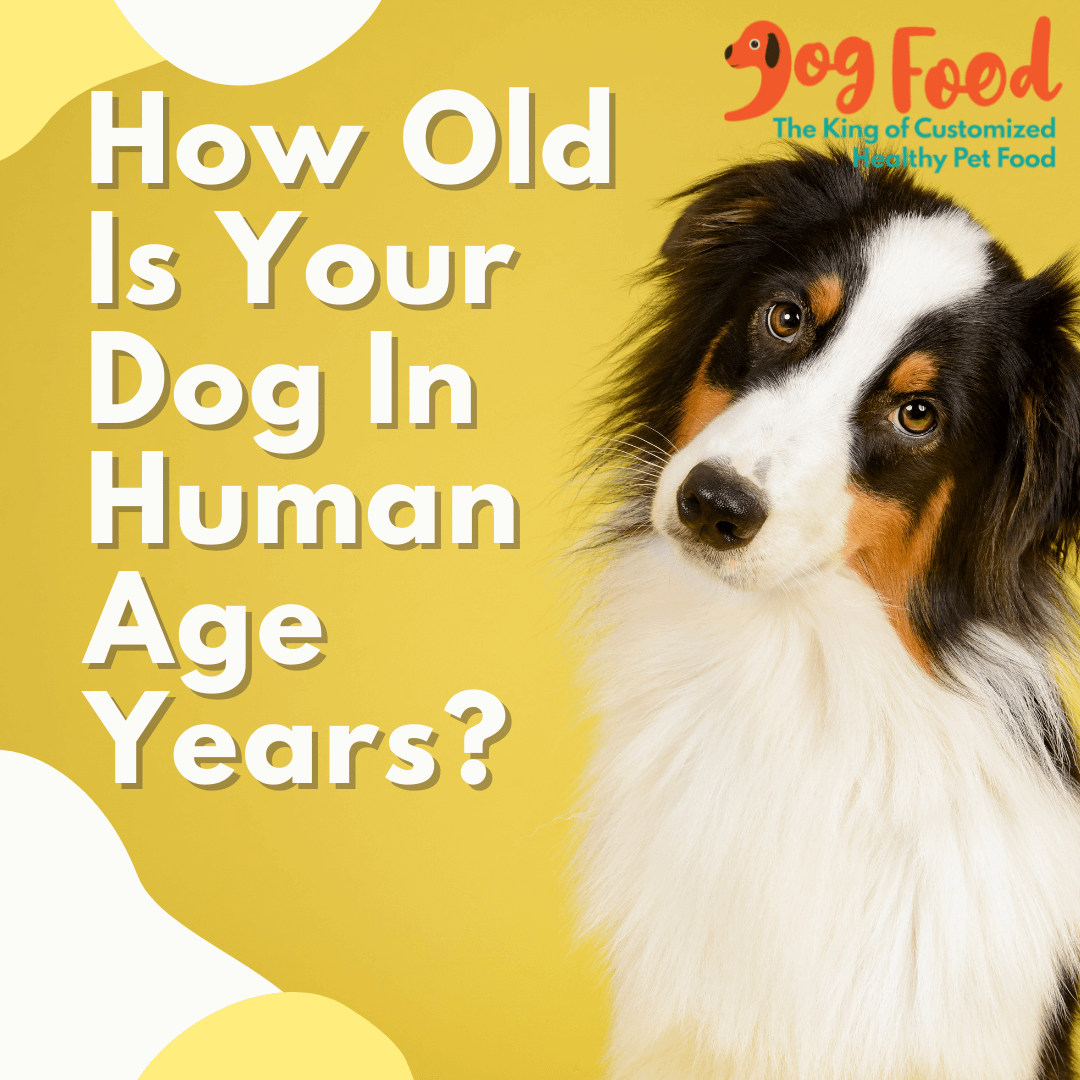 It’s commonly known that a year in the life of a dog is equivalent to seven years in the life of a human…or is it? Don’t panic if this is how you’ve been estimating your dog’s age. You’re not alone. The truth is, though, that this strategy isn’t totally accurate.

The “one dog year equals seven human years” approach was most likely designed to merely demonstrate that canines age faster than humans. Scientists and academics have now found a more accurate way of converting a dog’s age to human years.

How do I figure out how old my dog is in human years?
You can use a new formula developed by experts at the University of California San Diego School of Medicine to more correctly measure your dog’s age in human years.

These researchers looked at patterns called methyl groups in people and Labrador Retrievers to see how their DNA changes over time. They discovered that converting a dog’s age to human years may be done by multiplying the natural logarithm of the dog’s age by 16 and adding 31. (human age = 16ln(dog age) + 31) is the formula they use. As you can see, this calculation is somewhat complicated, therefore plugging in your dog’s age into an automatic calculator programmed with this formula, such as the one here, can be quite helpful.

For small, medium, and large dogs under 100 pounds, you can use this process to determine their age in an easier (and more accurate) way.

Because it realizes that not all dog breeds age in the same way. In general, smaller dogs live longer than larger dogs, thus while a seven-year-old Great Dane would be called a “senior” dog, a seven-year-old Chihuahua might not. As a result, it’s useful to break down a dog age chart by size, as seen below. Dogs are classified as small dogs (under 20 pounds), medium dogs (20 to 50 pounds), large dogs (50-100 pounds), and giant dogs (100 pounds or more).

Calculate your dog’s age in human years based on their size group using the dog age to the human age chart below: 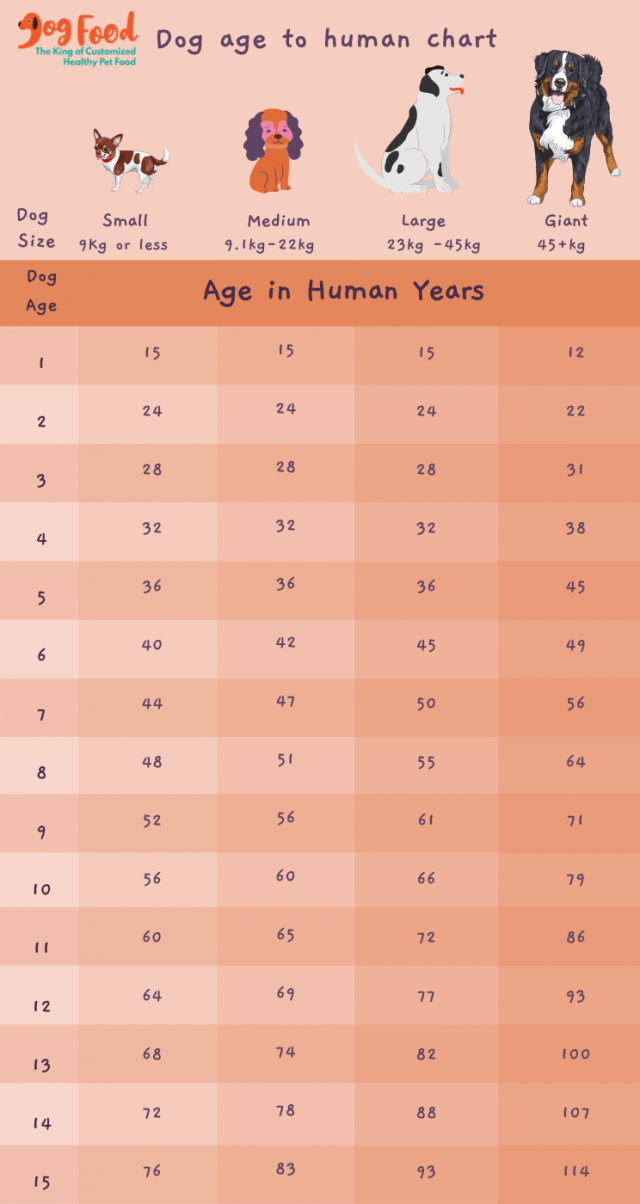 What is the average lifespan of a dog?
Aside from the giant group, small, medium, and large dog’s age similarly until they reach around the age of six, as seen in our dog age chart. Then, in comparison to their smaller and medium-sized counterparts, larger dogs age much faster. A small dog, such as a Dachshund, will be six human years younger than a large breed, such as an Airedale Terrier, by the age of seven. What is the reason for this?

In the end, science can not explain why smaller dogs age more slowly and live longer than larger dogs. Some studies believe it’s because larger dogs are more susceptible to age-related diseases, according to the American Kennel Club.

Similarly, larger dogs grow up faster from puppy to adult, increasing the risk of abnormal cell growth, cancer, and other diseases. Because of this, the “one dog year equals seven human years” formula isn’t entirely correct.

While the current method we’ve presented is more accurate, it’s still difficult to come up with a general formula for how dog’s age because it depends not only on their size but also on their breed and genetics.

What are common signs of ageing in dogs?

As a result, looking at physical and behavioural signs to identify your dog’s age can be useful. Teeth, for example, can be an excellent indicator of your dog’s age. All of your dog’s permanent teeth should be in by seven months; by 1-2 years, they’ll be duller and maybe yellowing; and by 5-10 years, they’ll show wear and possibly signs of disease, according to PetMD.

Other signs of your dog’s age, especially as they reach senior status, include:

If you’re not sure, you can always ask your veterinarian for exact estimation of your dog’s age. To give the best estimate of their age, your veterinarian will analyse features like teeth, body form, hair or fur, and eyes, among others.

Why it is important to know my dog’s age?

Estimating your dog’s age in human years using a dog age chart is a fun and informative method to discover more about them! It’s also significant for other reasons.

Namely, understanding how old your dog is and how they’re ageing allows you to properly care for them – and help offer them the best life possible.

Keep in mind that if you have a larger dog, you should start looking for symptoms of ageing around the age of five or six, but smaller dogs may not show any signs until they are seven or eight years old. In any event, as your dog gets older, you’ll want to pay close attention to their behaviour, activity level, and eating habits. A balanced diet and weight, consistent mental stimulation and physical activity, and frequent vet visits all contribute to extending your dog’s life expectancy. You should also think about getting pet health insurance to cover any unexpected accidents or diseases.

Last but not least…
Even while the popular “one dog year equals seven human years” technique has been around for a long time, it isn’t really accurate. Thankfully, a recent study has provided us with a more reliable method of calculating the age of our dogs.

Although the math is more complicated than a simple 1:7 ratio, you can always use our dog age to human years chart (or even print it out!) to quickly and easily figure out how old your pet is.

previous
10 Best Dog Food in Malaysia
next
What Causes Your Dog Itchiness?

Hi, how can I help?
Get RM6 off above RM138. Use code SIXOFF + Free Delivery.
Valid till 4/2
This is default text for notification bar
Learn more